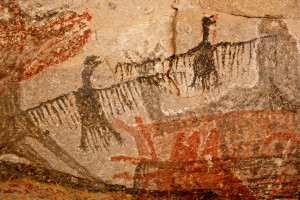 Humans have been bird watching for a long time. 40,000 year-old bird paintings beat out John James Audubon’s paint to canvas depictions by a slight stretch.  Our fascination with the avian species was key to helping date some of the oldest known artwork set onto the cave walls in Arnhem Land, Australia. The red ochre illustrations of the emu-like birds unfurl a thread that ties our two species together.

It isn’t just our fascination with a concept such as flight – the birds in those ancient paintings were flightless. It is the entire concept of “birdness,” which holds our desire to connect with these intelligent and resourceful creatures – they seem to hold the keys to a wisdom we can’t begin to search for.

Every culture watches birds. They are resurrection icons, deities, representatives of courage, strength and messengers to and from the spirit world.  These symbolic interpretations aren’t hard to miss. Watch a red-tailed hawk catching a current’s uplift – and the answer is there.

Writers in antiquity compounded the first true ornithological studies.  Birds appeared in the Indian Vedas, in Persian, Chinese and Japanese writings. The classical world delved into the feathered forum. Aristotle spoke of bird migrations and behavior in his Historia Animalium, and several passages concerning avian habits and appearance would be familiar to birdwatchers today! Aristotle should have availed himself of the e-book format —“the bird called chloris from being yellow beneath, is of the size of the lark, and lays four or five eggs; it makes its nest of symphytum…and lines it with straw, hair, and wool. The blackbird and jay do the same…the nest of the acanthyllis is also artfully constructed, for it is folded together like a ball of flax, and has a small entrance.”

You may need to bring your dictionary. 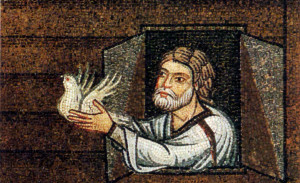 Christianity emerged in Europe and brought with it a compounded ideology of Levant teachings and resident pre-Christian beliefs. Birds feature prominently in Christian iconography, texts and practices. The Book of Genesis (Judaism) presents the story of the post-flood Noah releasing a raven and a dove from the ark in order to see if land had reappeared (the dove returns with the famous olive branch).

St. Francis of Assisi is regularly portrayed with a small bird. Assisi was especially connected to birds and he referred to all animals as his brothers and sisters. In 1220 he penned his “Sermon to the Birds.”

The modern age witnesses a dichotomy for feathered fauna. Intrigued by technology and driven to turn the wheels of science, 18th century society began to relegate birds into “specimens” and curiosities.  Driven by analysis and categorization, birdwatching was done at the end of a gun, rather than through the lens of field glasses (which were invented in the 17th century).  Stuffed specimens were packed aboard ships destined to eventually collect dust.  Interestingly, the 18th century hatches the first truly modern concepts of animal welfare, vegetarianism (practiced by Ben Franklin) and natural history movements.  These benevolence and “awareness” groups intertwined with other pressing causes such as abolitionism, human rights and poverty alleviation.  The modern interest in birdwatching as one geared to limit human environmental impact, to preserve avian species and to prevent habitat loss began in the mid-1700s.  Expansion into “unspoilt” ecosystems, and a rising understanding and quest to capture wisdom in nature through reason led by empathy, set the building blocks for our passions for birds and the natural world.

The founder of the Methodist church, John Wesley, claims that faith will “lead us beyond an exclusive concern for the well-being of other human beings to the broader concern for the well-being of the birds in our backyards, the fish in our rivers, and every living creature on the face of the earth.”  This voicing for nature as a thing to be cared for and honored is echoed in the words of the father of the naturalist school, John Ray. It is echoed in the writings of Voltaire, Benjamin Franklin, Thomas Jefferson and Thomas Paine.  Early ornithologists include Gilbert White and Thomas Bewick. 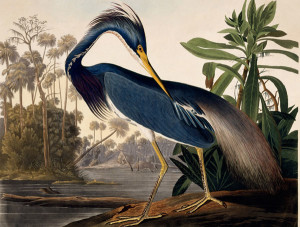 The 1820s saw the introduction of avian art painted by the popular naturalist John James Audubon. Audubon wanted to depict the essence of the birds as they were in life AND set into their habitat instead of the tradition of fixing subjects in static poses. It was the Victorian era’s widespread access to print media, the invention of photography and the trickling down of “hobbies” to the emerging middle classes that heralded what we would recognize as bird watching.

In 1905 the Audubon Society (named in honor of J. J. Audubon) was formed as a true conservation organization. Founded by George Grinnell, the society quickly collected high-profile subscribers to spread the plight of birds whose populations were being decimated by humans – some species were hunted to extinction. However; the first birdwatcher’s (the term birdwatching wasn’t coined until 1901) field guide for species identification was printed in 1889 by Florence Bailey. 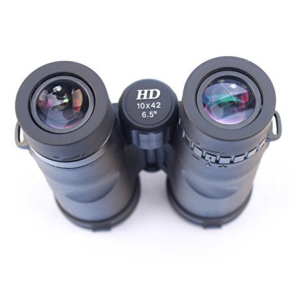 The rise in birding and naturalist clubs proliferated after the 1930s.  Scientific ornithological studies and the conservation based birding clubs saw a slow merging during the 20th century. Roger Peterson’s 1934 field guide made birding available to the general public. The popularity of binoculars enhanced the hobby after the 1940s, and now our century is enjoying this billion-dollar pastime!

Birdwatching is one of the few hobbies that blends biology, conservation, animal welfare and plain ol’ fun into one package. As a birder, you can choose how much and in what direction you want to take your hobby. You can hop a plane and join fellow ecotourists in the Amazon or hang a bird feeder in the maple tree outside your window.  You can start as a toddler and continue birding, as John James Audubon did, well into your wiser years.

What are you waiting for? 40,000 years of interest can’t be wrong. It’s time for you to join the birdwatching club. It’s fun, ever-changing, holds endless possibilities and benefits everyone including the economy, wildlife and nature.  After all, this hobby is for the birds!