Leupold is one of America’s top rifle scope manufacturers, as we’re sure you’re well aware by now. The extremely popular VX line of rifle scopes boasts some pretty eye-opening specs that cannot be ignored. Of course, you’re going to be digging into your pockets with the VX-3i 25x50mm. The lowest price tag for the least powerful version of the VX-3I is just over a grand. Don’t let the price tag be a huge deterrent, however. 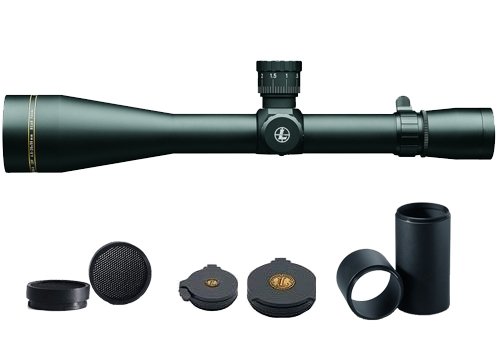 Let’s take a look at the impressive specs for the 25x50mm:

The scope’s focal planes are interchangeable between MOA (minutes of angle) and MIL (1/1000in) depending on your preference. For those that might be unaware, MIL and MOA are measurements used to zero in rifles. They help you determine the placement of your shot if it doesn’t hit on the dot (which is rare as it is.)

As to the VX-3i’s features, it is water and fog proof as constructed of fine, aircraft-quality aluminum so you know you’re protected against the elements. Perhaps the most noticeable feature of the VX-3i is its Twilight Max light management system. When visibility is low or unclear, the VX-3i will utilize the Twilight Max to give you clear and consistent light emission.

While user-friendly in most respects, the knowledge that goes into operating the VX-3i is little more advanced. The magnification levers are all within hands reach and the interior of the scope boasts updated optics that are specifically designed for long life. Since it is Leupold’s most advanced and up to date scope so far, it would make sense that it would be.

Compared to the VX-2

The VX line of scopes are extremely popular, no doubt, but what makes one better than the other? Cosmetic and tubular changes to the scope are one thing, but what additional features and enhanced optics come with the VX-3i?

It’s not uncommon to see these types of scopes mounted on bolt action rifles, in particular, the Remington 700 series. Everyone has their preference on how accurate they want their rifle to be. The VX-2 utilizes the CDS (Custom Dial System) that allows you to change the elevation of your shot according to the bullet you are firing. To be more specific, you can tune the VX-2 to be more accurate according to the weight of the bullet.

The VX-3i, on the other hand, uses the same system and has enhanced optics for greater range and target identification. This rifle scope accounts for elevation and windage as well, two very important factors when considering a target a long ways off.

Sure, the VX-3i is going to cost you a lot more than the VX-2, which is why the extreme marksmen is going to prefer it above any other scope. This means that its definitely not your average beginner’s scope. When conditions aren’t ideal, you want to make sure you’re able to get an accurate shot off before your target disappears. As the latest model in the astounding VX line, the VX-3i is definitely the scope for the job.