After the 90 GT, we wondered what sort of telescope Celestron would produce next. It would probably be something straight out of the pages of a science fiction book if it were anything more advanced than the 90 GT. Indeed, Celestron seems to be moving in the direction of hands-free telescope movement, in particular with the development of the NexStar 4 SE.

At first glance, it looks like there’s a telephone connecting the telescope to the motorized altazimuth mount and tripod, but this is a next generation object tracking system. Many of the features common across Celestron products also appear in the 4 SE. 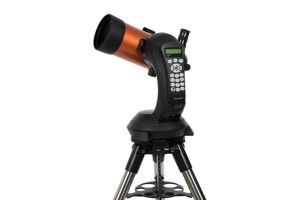 Where you end up purchasing the 4 SE will depend, but one thing that reviewers can’t deny is the unbeatable price. The 4 SE isn’t universally known as an entry-level/beginner telescope, but its hands-free control system makes it pretty easy to use.

The telescope’s small body means its optics can’t see the furthest distances into space, but that doesn’t mean that they sky isn’t full of objects within viewing distances. In addition to purchasing the 4 SE, you receive a 40,000 object database. These objects may not all be visible each night, but each night will yield a different sight.

In addition to the control system, many features such as SkyAlign allow the user to line up three, bright celestial objects in the sky for viewing. The StarPointer finder scope will help you lock on and stay in view of whatever object(s) you want to track.

If you’re looking at purchasing this telescope after handing your Vixen Space Eye off to your kids, you’re in the right direction. Most 4 SE users have raved about the telescopes portability and weight, making it easy to transport beyond the confines of your home and the surrounding area. Don’t get too over-confident, however, just like the 90 GT, it is quickly moved and if not rooted properly, can tip over with not too much force.

For the price, the 4 SE comes equipped with a majority of the features that appear individually in other telescopes. Don’t forget about its small but worthwhile ability to engage in astrophotography. It’s no surprise that the 4 SE is one of the best all around telescopes out there.

A major gripe is going to be the viewing range, but that shouldn’t limit your search for new objects in each night sky. With the 40,000 object database courtesy of Celestron, who knows what you will find in the last frontier!