It would be fitting that one of the crown jewels of Celestron’s stock would be the 8″ Advanced VX telescope. This machine tops our list as the most expensive telescope for valid reasons, not the least of which is its power to look deep into space and still capture high-quality moments with its ultra-fast f/ratio. 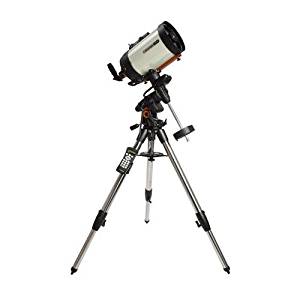 Why the steep price?

At nearly two-thousand dollars, it can be hard to reason with someone why you would need this telescope, but Celestron makes a very tempting offer. It may not be marketed as for beginners, but with the proper instruction and focus, anyone can become acquainted with its mechanics.

The Celestron’s optics and systems require an extraordinary amount of power, the equivalent of a car battery. It might be difficult to find a sufficient source of energy (though that’s not to say there are none). Celestron, therefore, offers a bundle that includes a 12-volt power supply. A 12-volt equivalent and an adapter will be needed if you plan to substitute your own.

A 2-year warranty is included on the telescope in the case of any unfortunate accidents. While this telescope is not as large nor as heavy as the LightBridge, its various parts are incredibly intricate and valuable. It probably doesn’t need to be said twice, but you should handle each piece with extreme caution and reference.

A standard VX comes equipped with a 40mm eyepiece, allowing for 51x magnification, but the highest magnification the VX can go is 480x. This optic grants the VX astrophotography capabilities, but the quality will depend on how far you want to magnify the image.

The eyepieces are also interchangeable with 20mm and 25mm pieces. If you are unsatisfied with what you’re getting from the 40mm, feel free to change it out with a smaller or larger one, but a good idea would be to double check the eyepiece and the telescope are compatible.

Some users have reported the VX is ideal for planetary viewing but is still capable of searching deep space. A 9×50 finder scope comes with your purchase, an excellent tool for tracking even the dimmest of objects in the night sky.

Like the iOptron, the VX makes use of the extraordinary equatorial mount, allowing for a broader range of movement across the sky when compared to those with altazimuth mounts. Celestron’s version of the equatorial mount is different from the iOptron’s and allows for greater stability and vibration resistance when planted on the ground.

When you decide to buy the VX, you should also be considering why you’re deciding on this one as opposed to all others.

It may be because you want to get the most out of astrophotography with one of the best optical telescopes on the market. But two-thousand dollars is a deep investment. You want this telescope to last you a long time.

The VX is a worthwhile machine that will satisfy anyone from the beginner to the astro-enthusiast. The trick is to become experienced and knowledgeable about everything the VX offers to maximize its stargazing potential.