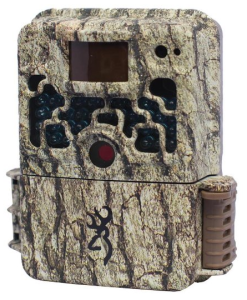 Browning has been a leader in outdoor gear for quite some time, but the new Strike Force Sub Micro 10MP Game Camera may be the company’s best creation to date. Coated in a highly effective, visually appealing camouflage design, it’s capable of capturing HD videos and photos of nature in its purest form. Videos can be taken for up to two minutes per shoot and thanks to its super quick trigger, photos can be taken at lightning-fast speed. With a ton of features and a modest price tag to boot, there’s a lot to like about the Browning Strike Force Sub Micro 10MP Game Camera!

There’s been a little downsizing taking place at Browning, and I’m not talking about the corporate kind! The good folks at Browning have taken everything we love about the company’s Strike Force Series of game cameras, such as HD video, a rapid-fire function, and a 100-foot infrared illumination range, and managed to fit it into a mini trail camera that fits right in the palm of your hand.

The innovative little camera is coated in a visually appealing yet highly effective camouflage design and comes in a handy compact case featuring a fantastic Master-Lock Python cable slot. This simple yet awesome feature allows you to make use of its nylon-webbing strap or easily secure it to almost any tree.

While some users have reported problems with the camera’s latches, like other Browning products, the Strike Force Sub Micro 10MP Game Camera comes with a full warranty and Browning will replace any malfunctioning camera with no questions asked.

Thanks to its HD video capabilities and top-notch video processor, you can capture nature in its pristine form and shoot videos in crystal clear 1280p. Depending on the situation, videos can be taken from five seconds to up to two minutes per shoot.

The Browning Strike Force Sub Micro 10MP Game Camera generously offers 10-megapixel performance for enhanced picture quality, HD video with sound, and Zero-Blur technology for nighttime infrared photos. With a lightning-fast trigger time of 0.67 seconds and a 100-foot flash range for IR photos, this pint-sized game cam is one of the best in the industry. Oh yeah, I almost forgot to mention the programmable picture delay as well, which allows you to set delays ranging from five seconds to up to 60 minutes.

As far as game cameras go, the Strike Force Sub Micro 10MP Game Camera takes surprisingly fast photos. With a super quick trigger time, it’s capable of capturing up to six rapid-fire and eight multi-shot images. In multi-shot mode, the camera can take several photos every time a deer, turkey, or other animal triggers it. Typically, each shot is three seconds apart. In rapid-fire mode, the game camera can take up to six photos in much faster 0.3-second bursts.

The Browning Strike Force Sub Micro 10MP Game Camera comes with an easy-to-program backlit control panel and display that’s easy to read and reasonably clear. There is also a picture info bar that shows a variety of details, such as the date, time, temperature, and moon phase.

Like other Browning Strike Force game cameras, the Strike Force Sub Micro 10MP Game Camera comes equipped with Browning’s Buck Watch time-lapse software, allowing you to take time-lapse videos and pictures prior to programming it. This is particularly helpful when setting the camera up in a new location where you’re not quite sure where deer or other game is entering from. It can capture an entire field or location and take photos or videos of game more than a whopping 200 yards away, ensuring you never miss a single animal. With the software, you can also play back video clips, making it an awesome tool for hunters and other outdoorsmen.

The Browning Strike Force Sub Micro 10MP Game Camera comes stacked full of features typically found on game cams twice the size. With an effective and appealing camouflage design, HD video and photo capabilities, a really quick trigger, and a ton of features designed to make it one of the best game cameras ever made, it’s hard to go wrong with this impressive game cam.